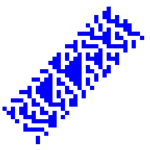 The new “Cambridge North” railway station opened on 21st May a short distance from Robotae’s offices. The architecture features a pattern inspired by The Game of Life, so we did the obvious thing – find out how the pattern evolves:

Although we think it’s great that the architects included such geekery, the pattern they used could be from any cellular automaton. We’d have preferred to see some features in the pattern that made it more obviously a Life pattern, such as gliders, blinkers, and blocks. A glider gun would have made our day.

Update (31st May): The reason it doesn’t look like a typical Game of Life pattern is that it was taken from Wolfram’s Rule 30. The architects admitted this after some questioning. So Cambridge’s new station has a pattern from an Oxford alumnus’ cellular automaton! It could still be the starting pattern for the Game of Life, though.