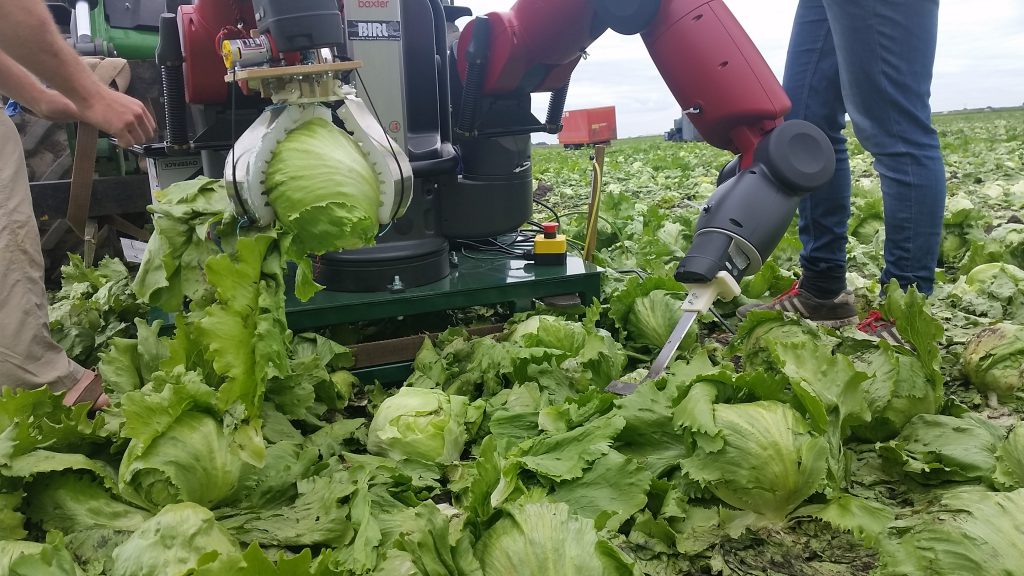 Advanced engineering could be the solution for the sustainable intensification of agriculture, as technology for producing service robots reaches maturity. The UK is emerging as a leader in robotics with many universities working in this area. Experts in robotics from University of Cambridge, University of Lincoln and Harper Adams University will be discussing the latest developments at an event organised by Agri-Tech East.

So what exactly is a robot? Dr Andre Rosendo, a Research Associate at the University of Cambridge, believes that there are two critical factors that separate a robot from a machine – the capacity to be autonomous or to act with some degree of decision, and presence of actuators, which allow a machine to alter its environments. This precludes computers and fridges from being called robots.

He explains: “We are using our knowledge of soft robotics to create deformable manipulators, or ‘hands’, that can manipulate ‘fragile’ produce, such as broccoli, strawberry and mushrooms. Currently, we are working on Vege‑bot, a harvesting robot that can handle and cut iceberg lettuces with the same handling care as human harvesters. In the future the robots will have the potential to help elderly people from their beds, to handle glasses as a bartender or to interact with children.”

Dr Rosendo will be speaking at the Agri-Tech East event alongside Professor Tom Duckett, who leads the Lincoln Centre for Autonomous Systems at the University of Lincoln.

Professor Duckett says that agricultural robotics bring benefits of reduced labour costs, economic sustainability, less waste and better use of natural resources. The technology has the potential to be deployed at any time of day and impact positively on the productivity and life quality of agricultural workers.

The Lincoln team, part of the University’s Lincoln Institute for Agri-food Technology, has been working on multiple projects in this area including 3D mapping techniques for improving the precision of agricultural sprayers and a new project in 3D imaging for broccoli harvesting, which is producing strong results and attracting interest from end users such as the Brassica Growers Association.

Prof. Duckett continues: “Already we can envisage agricultural robots that could perform multiple tasks, for example, inter-changeable tools would allow switching between tasks such as seeding, tillage, spraying and harvesting.

“You could also have robots for agriculture and food production that would perform other useful tasks at the same time such as surveillance, keeping a watchful eye on crops, livestock and expensive farm machinery, while carrying out their primary duties on the farm or in the factory.”

A number of machinery companies are investing in the technology and a project in 3D imaging for robotic weeding is currently being carried out with a local company, Garford Farm Machinery, world leaders in automated weeding equipment.

Prof. Duckett believes that the underpinning technologies for robotic perception, learning and action are already reaching the required level of maturity to leave research laboratories. So what steps need to be taken to transition from lab to work on the farm or in the factory?

“The big challenge now is how to cross the so called ‘Valley of Death’ between the development of useful prototypes by researchers and the mass production of agricultural robots which are available to the farmer, “ he says. “We need investors to come forward and believe in what we are doing. There is also a need to convince farmers that we can produce robust and effective machines that can really do the job.”

Dr Rosendo agrees that it is important to cultivate a greater understanding between all parties: “It is often said that academics are only interested in publishing papers, but the research can provide competitive advantage for early adopters. We are interested in talking to companies that see a more strategic benefit in developing potentially disruptive technologies.”

Despite all these exciting advances, Prof Duckett believes that full automation is “not necessarily desirable”, and instead sees a future of environmentally friendly ‘robot helpers’:

“Robot helpers will increase the productivity and life quality of agricultural workers and help to deliver the sustainable intensification of agriculture that will be needed to help feed a growing population while minimising the impact on the environment. Smart robots that run on battery power rather than fossil fuels could also be part of the solution for a cleaner, greener future.”

Dr Belinda Clarke, Director of Agri-Tech East, says: “We now have the capability to use robotics efficiently in agriculture; this is no longer a sci-fi concept, but one rooted in reality. The current status and latest technological developments will be discussed at the upcoming Pollinator meeting.”

If you are interested in seeing how robotics could add functionality to your product development then Robotae provides a consultancy service. 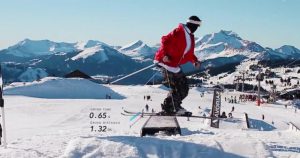 Robotae, a technology consultancy specialising in robotics and mechatronics, will be at the Engineering Design Show for the first time.  The company is behind the electronics of Kickstarter sensation Carv, the world’s first wearable to analyse skiing technique.

Jamie Grant, co-founder of Carv, which has developed a digital ski coach that provides feedback in real-time as users navigate the slope appreciated the support. He says “Robotae gave us high level advice and support with their extensive experience in electronics, allowing us to optimise the cost and performance of our product.”

Visitors to the Robotae stand will see video footage of Carv in action, alongside other client products such as innovative sleep sensing headphones.

In addition, Robotae founder Dr Rathbone will be demonstrating on the stand the impressive Symmetre robotic platform, which delivers omnidirectional movement – rotating on the spot, moving forwards, backwards and sideways.

Housed in a specially built darkroom, the gonioreflectometer takes images of a textile sample (in the centre) from different angles using a camera on one arm, illuminated from many directions by a high quality spotlight on the other arm, to measure and characterise its reflective properties. 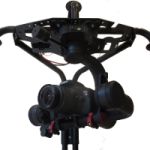 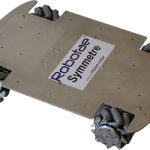 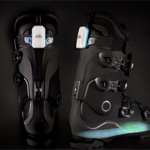 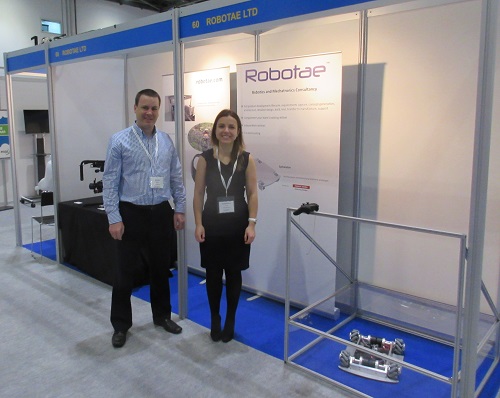 This was one of the biggest events of its kind –  the breadth of demonstrations and discussions showed what an exciting technology area this is and the wide application of mechatronics and robotics.

This annual conference and exhibition aims to bring the entire UK robotics community together to demonstrate and debate new innovative ideas about robotics. Ultimately, the main purpose of these ideas is to help business take advantage of the operational efficiencies and cost savings that are associated with robotic technology.

The Show was launched in October 2014. It was the largest event ever assembled for the emerging commercial UAV and robotics industry. With 1500+ attendees the event was the first genuine marketplace for non-military UAVs ever.

See more about the 2016 event at: http://www.terrapinn.com/exhibition/the-commercial-uav-show/ 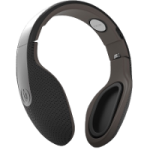 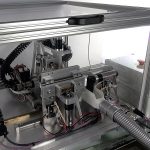